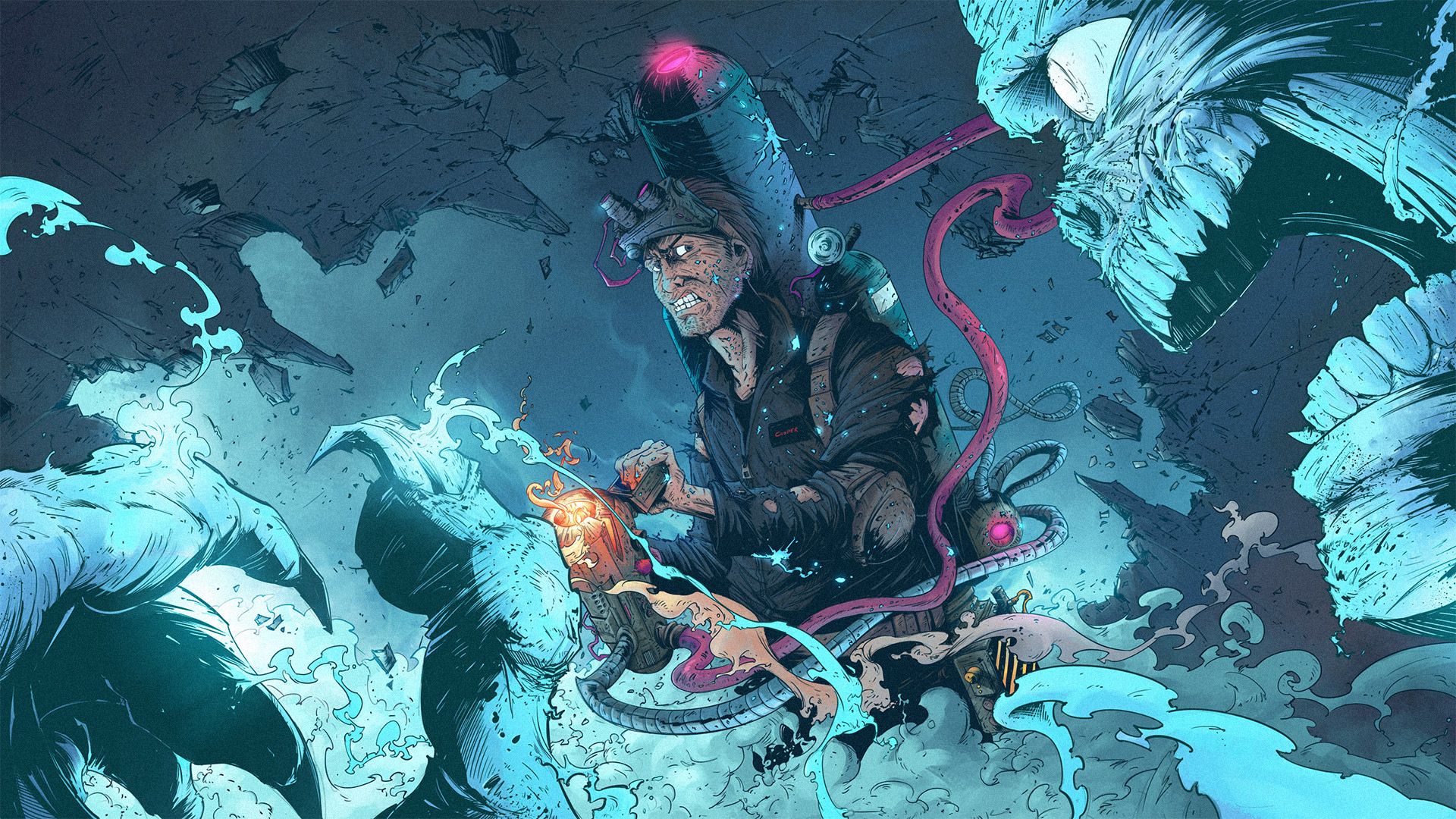 A CodinGame Contest is an online programming contest where the coders are presented with a game for which they have to program an AI. Your AI then gets ranked depending on how well it battles against the other AIs.

The most recent contests have been 8 days long, and there’s a fairly new league system. You start out at the far left, in the wood league, and have to work your way up to the top by ranking better than the boss in the arena. This is a very fun way of seeing how you progress through the contest.

If you want to read the full report with a more detailed description of the game, please do so on the CodinGame website.

Before the contest started I decided to not program for a while, because I knew that I would be programming a lot for 8 days. The only thing I did was prepare a small simulator environment so that I could create an offline simulator of the game once the contest had started, just in case it would be needed.

I also spent some time with my friend, speculating what the game would be about, what we could expect and what we might need to program.

The game is played on a 16001 by 9001 field. There are 2 teams, one starts at the top-left corner and the other at the bottom-right. Each team starts with the same amount of busters, where the number can be from 2-5. There are ghosts scattered around the map, each ghost has a stamina of either 3, 15 or 40.

The map has a fog of war which means that your team can only see what is 2200 units away from your busters.

The goal of the game is to bust more ghosts than your opponent.

Just as with every CodinGame contest, a couple of hours before the contest starts, people start gathering in the chat. Hype starts to build up and you can feel the excitement running through your veins and you think “This is gonna be one hell of a week!”. But before you know it, the time has already come!

The contest has finally started. In the beginning I like to spend some time reading through the rules and understanding how the game works before I start coding. A couple of hours into the contest I had made it to the bronze league and kept adding small conditions to improve my AI.

The next day, I just continued working on the behaviour of my busters a bit. I made a very basic state machine where the busters decided what to do with the following priorities:

With around 70 lines of code, these simple commands got me to the amazing rank of 5/531. But there were still 6 days to go, a lot was about to happen!

Ranking 5th was considered pretty good for me, but it was still very annoying to wait for so long to see if a change was good or bad. So I ended up programming an offline simulator over night and I made quite a lot of progress. I still had a few things to fix, but I had gotten movement, busting and releasing ready.

On the long wait for the bronze boss, I couldn’t think of much improvement for the AI. However, I ended up making 3 small changes:

When the boss was finally unleashed, I was promoted to silver, and there wasn’t any changes to the game rules, so I continued working on my simulator.

Back to The Simulator

I finally finished the stunning for my simulator and it was working fine… well, until I found a horrible bug, that is.

The simulator itself was working great and I could have a couple of AIs play hundreds of games in a minute to then look at the results. But the problem itself was in the game simulation. When I saw that the top-left team was winning 998 vs 2, I knew that there was something wrong. So I let it be, for now. 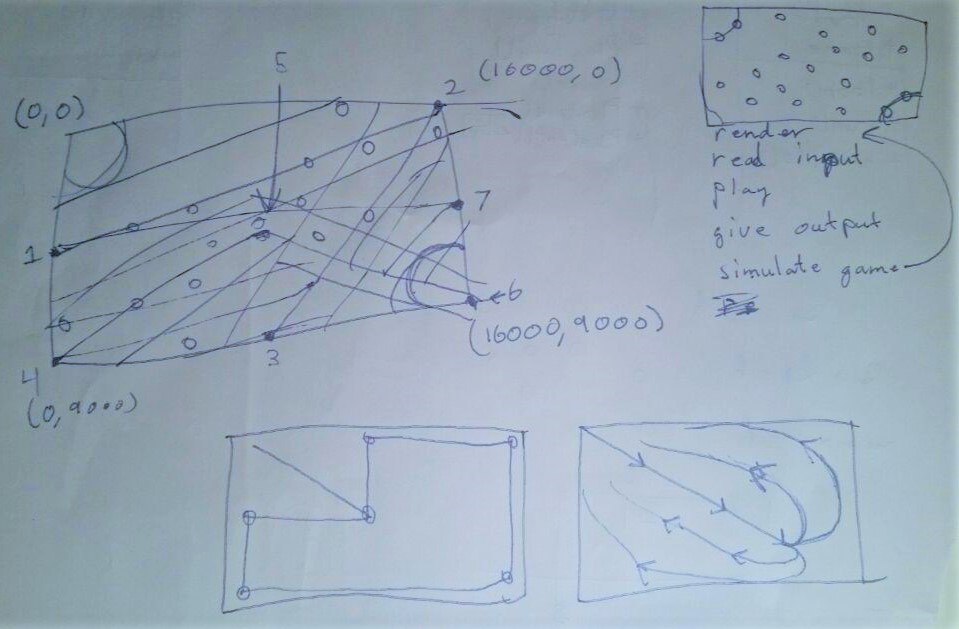 I met up with my friend to discuss some tactics. We discussed a lot of different things like wandering strategies and picking paths, herding strategies, how to protect against base campers and searching techniques.

Instead of randomly running around, or following a bad path, we talked about how we could improve our paths to cover more area.

We also talked about herding and how you could make it so the ghosts move towards your base, but at the same time, you want to do that without losing too much time.

About the base campers, one strategy could be to drop your ghost, let the opponent pick it up, then you’d stun the opponent and secure your score. The problem with this is that the better players might stun you before they bust the ghost, or they might be more than 1 camper, which makes your life harder. So, we thought that you might be able to have a buster escort the carrier to the base, just to keep the ghost safe.

For the searching techniques, we thought of splitting the map into a grid and searching the areas that hadn’t been searched through already, in hope to find hidden ghosts.

Once I got back home, I checked the logbook and saw that they had launched the replay contest and thought it would be fun to make something special. So I started working on a little choreography for my busters where they walked around and said things. 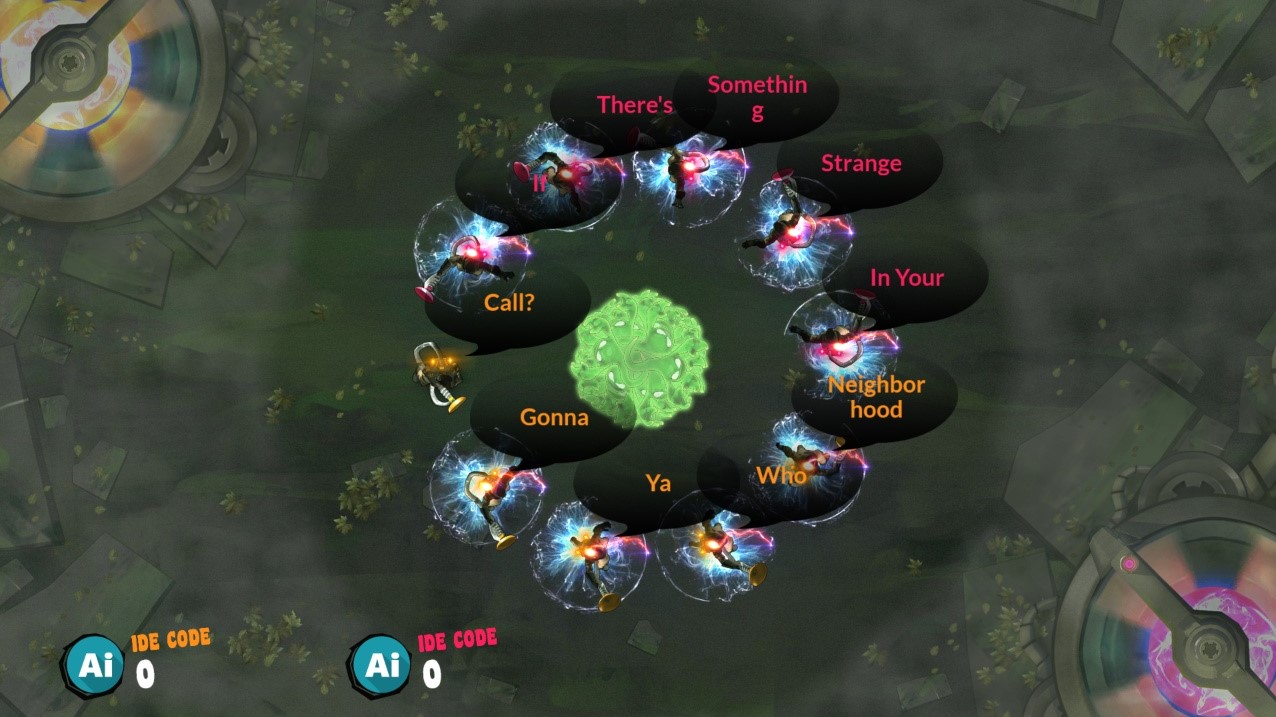 At first, it wasn’t so serious, but once I had gotten a bit into it and got positive feedback from a couple of friends, I decided to invest some time into it. I stayed up all night working on it to get the perfect timing and alignment, that was one long night…

After all those hours of working on the replay, I got a bit sick of it because I had seen it so many times. But it was finally time to send the replay to the CG team and let them have a look at it before going to sleep.

The next day I checked my mail and to my surprise, here’s what I saw:

Woah this is AMAZING! Thank you a lot for this! The team can’t believe it :)

At first, it was hard to believe what had hit me, it turned out the CG team loved the replay. It was later shared on Twitter where it got a crazy 24 likes! They even linked it in the newsletter and the logbook.

A little while later, [CG]VonRickroll writes to me in the chat telling me “Husenap your replay is fire! The whole team has enjoyed it so much.”. This is when people started noticing the replay and the chat went crazy, I couldn’t stop smiling. :’) 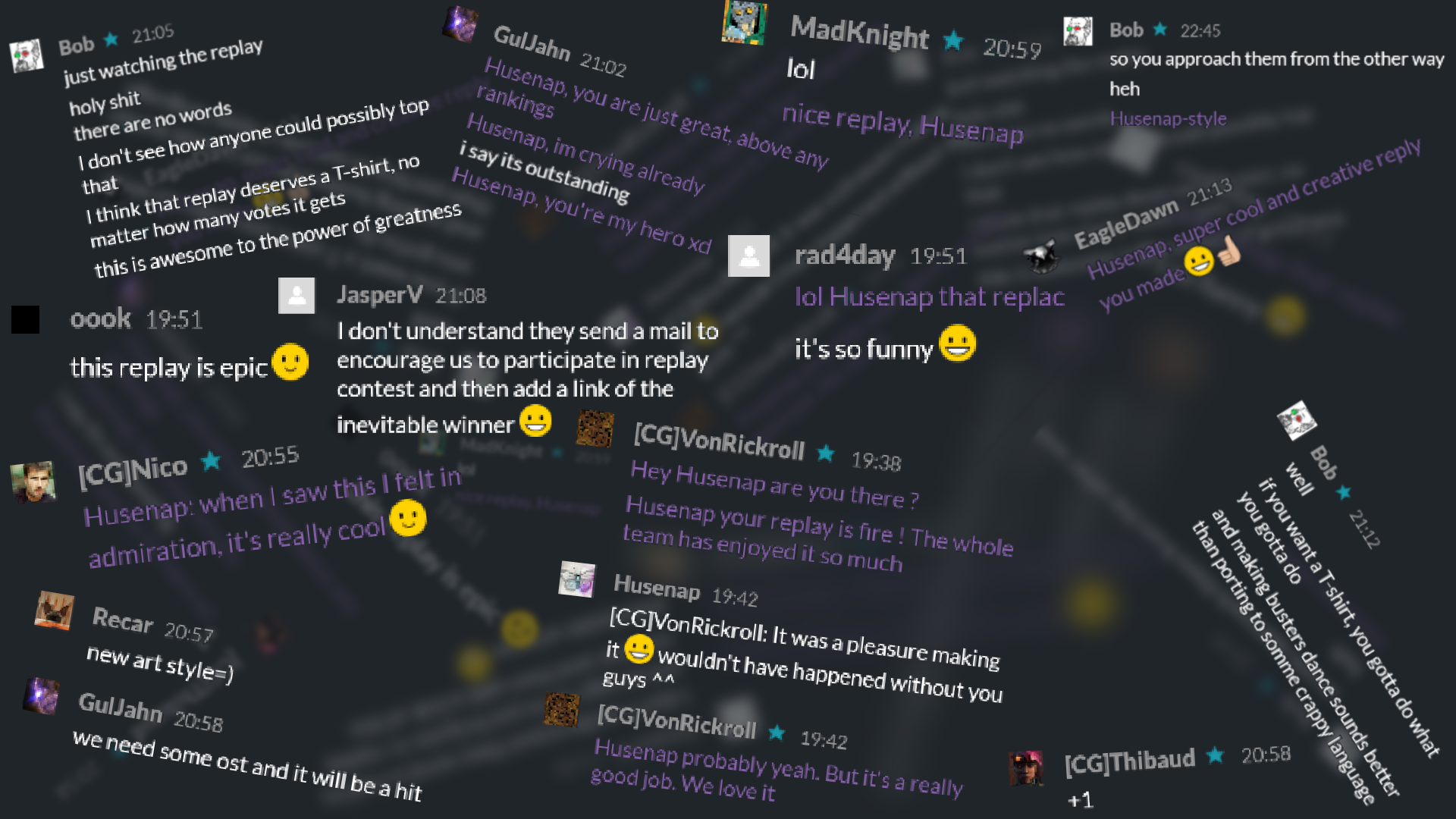 It was finally time for another promotion! Everyone had been patiently waiting for the silver boss to be released. My code from Sunday was still ranking pretty well, and once the silver boss was released, the surprising amount of around 360 coders were promoted to gold.

I tried tweaking my code a bit, hoping to improve things, but nothing seemed to perform any better, so the only thing there was left to do was to wait for the gold boss to be released. 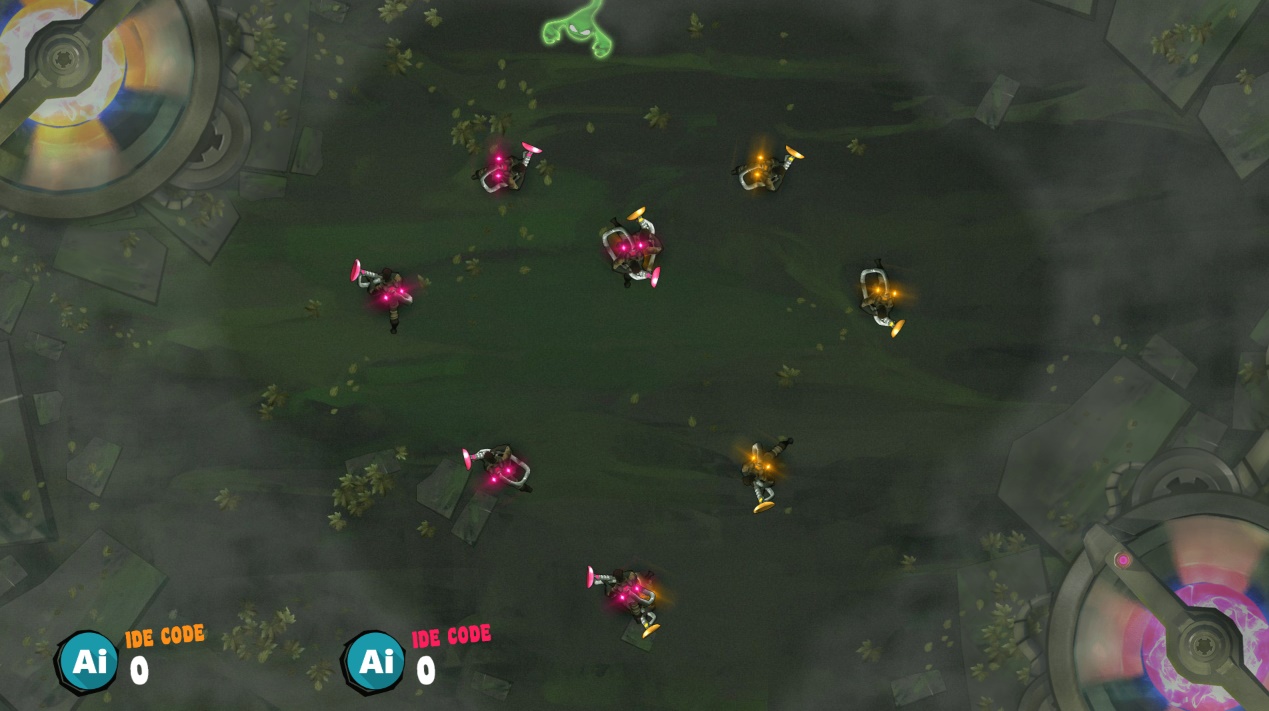 I had been very touched by all the people who had written to me and I wanted to thank everyone. So, I was thinking of how to do that, and thought, what’s better than making a replay to thank everyone?

So I spent my entire Thursday, just trying to come up with something that would be a great way to thank you people, and I ended up with this replay!

This is a big thank you to everyone who wrote to me in the chat and liked my replay, sadly, I couldn’t fit more names in there, so… if you’re not in there, thank you anyway!

Friday(Day 7) – The Legend of The Spectre

It was now time for the promotion to the legend league! At the time, we were 700 coders in the gold league and judging by the previous bosses, everyone in the chat suspected that 200-300 people would be promoted. It was pretty funny when Bosspectre finally came and crushed everyone and reached the top 100, so people thought that CG had targeted the top 50. Only to find that 19 people were promoted.

I was ranked around 200 in the gold league which I wasn’t happy with, so it was time to write some more code, other than what I already had from Sunday.

Saturday(Day 8) – Time For a Change

My code from Sunday was simply not enough to rank well near the end of the contest, so I decided to try something new.

The way I decided to go was by using a decision tree, it was the first time that I used one. I ended up with something along these lines: 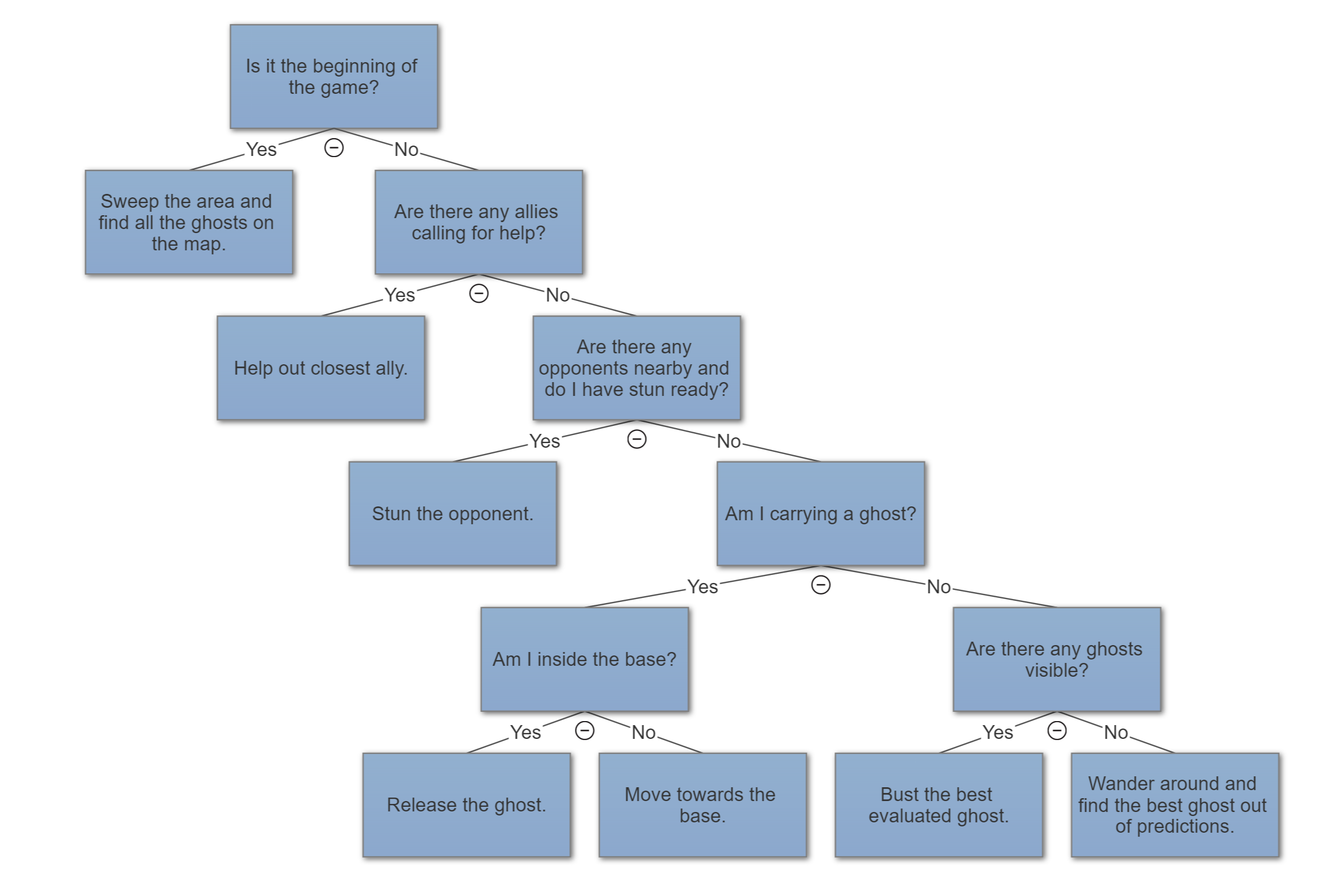 Using a decision tree gave me the ability to set any node as the root node and test each operation to see if it was working. It was probably too late to start working on this one day before the contest was over, but I wasn’t going to give up.

I spent the entire day testing all the different things that I could come up with and see if they worked, here are a couple of things that I did:

Since Sunday, my busters had been ignoring all the ghosts with stamina 40 for the first half of the game. It was really bugging me because this wasn’t an acceptable strategy anymore since most of my games ended up with my busters chasing ghosts and waiting, instead of busting them! So I decided that I needed to change the way that I evaluate the ghosts, instead of sorting the ghosts by stamina and ignoring the ones with stamina 40, I came up with a simple formula which looked something like this:

This was one of the best changes I made this day because it boosted my rank by quite a bit. My busters weren’t patiently waiting to bust ghosts anymore and they started picking ghosts that I didn’t expect them to pick. I managed to jump from rank 200 in gold, to rank 23.

The final day of the contest was here! These 8 days had felt like forever, but at the same time super short.

I spent the last day trying to tweak my busters’ behaviour and made a few changes:

All in all, this contest has been amazing, as usual, and I feel like the CG team are getting better at this after each contest.

The league system is something that I personally find really exciting, because it makes leaderboard climbing so much more fun. However, it would be nice to be able to play against people outside of your league, as long as the rules are the same, such as the gold and legend leagues.

Contests Are Great For Learning

I’m really thankful that CG hosts these contests since there is so much to learn!

We have yet to know what we can learn from the next CG contest, HyperSonic!

I’m very excited about it, expect me in the arena! ;)

If you’re interested in knowing how I made my replays, then you can read about that in my other post.